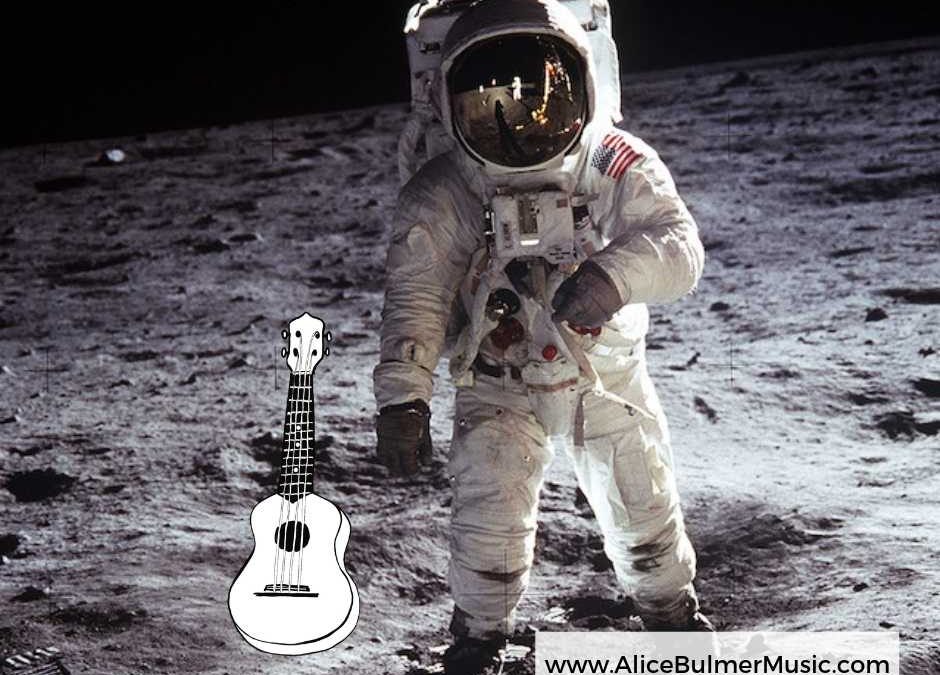 My ukulele group, The Strumbles, is playing space-themed songs this week.

Fifty years ago, some guys went for a walk on the moon. A couple of my friends were born around that time, and they’re having a combined birthday celebration.

One of the many great things about belonging to a ukulele group is that you always have live music at your parties.

Here’s a link to my post with more about The Strumbles, Not Just A Tiny Guitar.

Turns out there are a lot of moon songs, that are great to play on ukulele.

Maybe even more than sun songs. (You Are My Sunshine, You Are The Sunshine of My Life, Good Day Sunshine, Here Comes the Sun, Bring Me Sunshine, Ain’t No Sunshine When She’s Gone, etc.)

Anyway, back to the space song project.

Elton John and Bernie Taupin’s epic ode to the man who’s just doing his job, even though he’s way out in space.

We’re playing it in C, which is a good key for a group that’s mainly women singers. As well as being easy to play on ukulele.

Here’s a link to my post about transposition for ukulele, if you’d like to know a bit more about this.

We love Kate Bush’s woozy version of Rocket Man (see here for the video). In fact we love almost anything Kate Bush does, but she does this song in C sharp minor, which is not a ukulele friendly key.

And then there’s Space Oddity.

“Ground control to Major Tom…” is a Strumbles party essential. David Bowie released this song on July 11, 1969, just ahead of the moon landings.

Our version is based on a chord chart from the Big Muffin Serious Band, local ukulele heroes and Waikato music icons.

I can’t find a video of the Big Muffins playing Space Oddity, but here they’re playing Dark Side of the Moon, which isn’t totally irrelevant to the theme of this post.

Dancing in the Moonlight is another of our party favourites.

It was a big hit for French-American band King Harvest in 1972.

We play Dancing in the Moonlight in E minor. It only has four chords. Em, A, D and Bm7, and a very cool groove when you get going.

The words are great too.

“We like our fun and we never fight, you can’t dance and stay uptight, it’s a supernatural delight, everybody’s dancing in the moonlight…”

Who’s going to argue with that?

Blue Moon is a classic moon song, by Rodgers and Hart, 1934.

According to Wikipedia Blue Moon may be the first pop song to use the “doo-wop” chord progression (I, vi, IV, V) extensively and profitably.

We play it in C, so the chords go C, Am, F and G7. The verse is easy, but the middle eight section has a couple of tricky chords to get your fingers round.

Neil Young’s Harvest Moon is one of my all-time favourites.

It’s a glorious gem of a song, sweet and groovy and a little bit melancholy, all at once.

Harvest Moon sounds really old, like it’s always been here, but Neil Young released it in 1992. Okay, that’s 27 years ago, which is a fairly long time in the scheme of things.

We won’t be leaving out Van Morrison’s Moondance.

This is the title song of Van’s third studio album. It was his first big commercial success, and it’s his most famous song.

Moondance was released in 1970, so it’s probably not unrelated to astronauts etc. Our version comes courtesy of the San Jose Ukulele Club.

Another moon song contender that we are rehearsing is It’s Only A Paper Moon. Ella Fitzgerald does a beautiful version.

And then there’s Fly Me To The Moon.

Our ukulele version is in the same key as Frank Sinatra’s iconic recording.

To round it off there’s Bad Moon Rising, Creedence Clearwater Revival’s apocalyptic rant about living in stormy times. It’s cathartic to sing – a good one to play at climate change events.

We play Bad Moon Rising in D. I love the jangly sound of ukulele in D. Bad Moon Rising has only three chords and a basic shuffle strum with a distinctive rhythm pattern. Many Creedence songs have interesting rhythm.

The moon song well is deep!

What are your favourite moon songs?