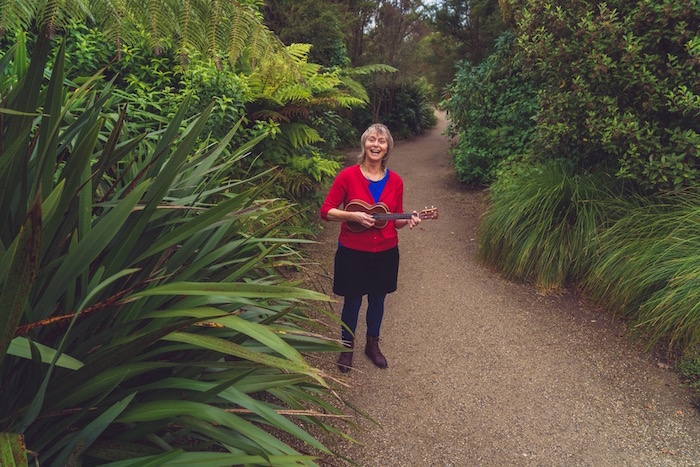 I have a birthday coming up, and I’ve been dreaming up a list of songs for my ukulele group to play at my party.

When we’re going to be playing and singing the songs, the song choices feel quite different from a Spotify party playlist. I think so, anyway.

Some musicians say, “I don’t mind what we play, I just love making music.”

But it doesn’t work that way for me. Playing the music that I love, with people I love, is what makes it sweet for me. It’s sheer joy.

The power of lists

Playlists are important for special occasions. If you’re going to be performing, you’ll want to practice.

Even with spontaneous party jamming, having a list of songs that you know how to play is very handy.

When I don’t have a songlist, my mind sometimes goes blank.

Songs are a bit like dreams. If we don’t write them down somewhere, they may disappear. Even when it’s songs we know really well.

If I don’t need the sheet music, I just write down the song titles. There are lots of good party songs, that are easy to play on ukulele, on my Youtube channel. Check it out here.

The music I love

Everyone’s taste is different. But we can find common ground, and extend our musical horizons, through playing music that other people like.

I’ve come to love some pop songs through playing them on ukulele. For example, I adore playing Abba on ukulele. But I didn’t appreciate Abba in their heyday. I had my head in classical music in those days.

There might also have been a bit of cultural cringe via my Swedish-American grandmother, Adeline Nordendahl Hirsh. I don’t think it was very cool to be Swedish in the USA in the early 20th century. Here’s a link to a blog post I wrote about my Mormor, “Coming to the End of a Rug”.

I love most of the songs I teach in my ukulele classes.

(Which is great, because we play them over and over again.)

There are a few exceptions. I encourage students to suggest songs, and sometimes they come up with music I don’t particularly enjoy.

But that’s fine with me. Because one of my big aims is to empower people to play the music they love.

More often, I rediscover songs that are great to play on ukulele, after people request them.

For several years I made music regularly with my mother, Sue, and other residents in the dementia facility where she lived.

Here’s a link to my post about the wonderful music we made together at Shelly Beach Lodge, “Songs to Remember”.

I gradually collected a songbook of music that worked well in our music sessions.

The main conditions were that I liked the songs; that Sue knew and enjoyed them, and so did most of the residents. Also, they had to be reasonably easy to play on ukulele, which cut out quite a lot of Tin Pan Alley songs, and songs from musicals too.

“Summertime” was great. And “What A Wonderful World”. But “Some Enchanted Evening” has way too many chords!

The songs also had to be reasonably easy to sing. Because sometimes it was mainly me singing, if the residents were sleepy. Usually they woke up gradually once I got started.

Apart from “You Are My Sunshine”, it wasn’t a typical “oldies singalong” songbook.

I also included some songs that the staff (who were from a wide range of cultural backgrounds, including Filipino and Tongan) knew and enjoyed. These included “Three Little Birds”, “By The Rivers Of Babylon”, and (at Christmas) “Feliz Navidad”.

We always sang some New Zealand songs too. “Tutira Mai Nga Iwi” was a big favourite, and so was “Po Karekare Ana”.

In my Saturday afternoon ukulele group, The Strumbles, we don’t bother with playlists, unless we’re practicing for a performance. We have folders bulging with music and everyone gets to pick their favourites.

We never know which songs will work well in the group until we try. Some great songs are tricky, but lots of fun to play. “Goodbye Yellow Brick Road” is in that category. We love playing it, but we probably won’t be performing it any time soon.

Every ukulele group has its own repertoire, based on the group members and the group leaders. Mike Dickison, author of The Kiwi Ukulele Handbook, claims that the one song that’s common to all ukulele groups is “Folsom Prison Blues”.

Back to my party playlist.

Because it’s holiday season and we don’t have much time to practice, I’ve picked mainly songs that we’ve been playing for years.

There are a couple of my favourite Beatles songs, “Drive My Car” and “We Can Work It Out”.

“And She was”, by Talking Heads.

“Hymn To Her”, famously sung by Chrissie Hynde of The Pretenders.

There’s “What’s So Funny ‘Bout Peace, Love And Understanding”, which is a Strumbles favourite.

And I hope we’ll get to play Jefferson Airplane’s “White Rabbit”.

Because it’s my party, after all.

I teach ukulele to people all over the world via Zoom and Skype. If you happen to live in Hamilton, New Zealand, I also teach in-person classes.