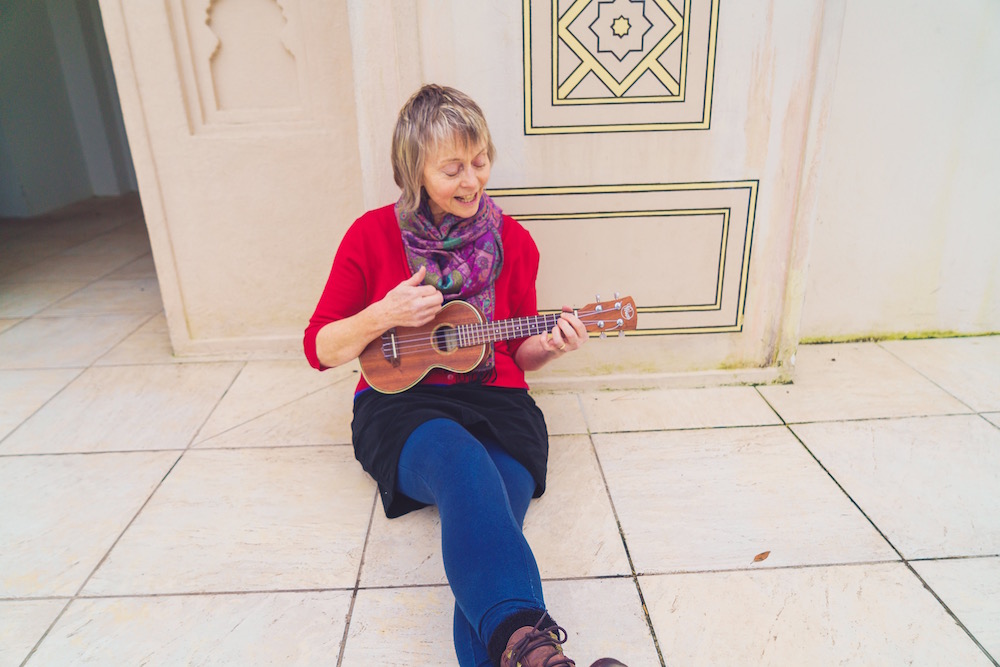 “How many chords are there?” asked one of the people in my beginner ukulele class.

The answer is, lots and lots. If you put one, two, three or four fingers down anywhere on a ukulele, in any shape, that will be some kind of chord.

Does that mean you have to learn all these chords, to play ukulele?

I think 14 chords is plenty to start with.

You don’t have to learn all 14 at once. Learn a few chords at a time, as they come up in songs.

It’s possible to reduce the essentials to 14 chords because ukuleles are quite simple instruments. They play best and easiest in just a few keys.

C, G, D, A, Am, Dm and Em are the best keys for a ukulele in C tuning (the most common ukulele tuning).

The explanation behind this delves into music theory. For a bit more detail, here’s my post on transposition and how it works on ukulele.

However, when you learn barre chords you can play a ukulele in any key you like. But barre chords don’t suit all players. You need to develop a fair amount of finger dexterity and technique.

You don’t have to learn all the chords in existence.

But you do need to get your hands and head around some basic chords – especially the ones in my beginner chord chart.

When you can play most of these without looking at the chord tabs too often, then you’ll be able to cope with a couple of new chords in a new song without too much stress.

Most songs don’t have 14 chords. There are plenty of songs with three or four chords. Here’s a link to my post about great three-chord songs.

I’m part of an organization in my community called the Waikato Ukulele Jam. We run regular group ukulele events.

Sixty or more players turn up and play together in harmony. Everything from teachers and professional musicians, to people who still have the price tag on their ukulele.

At last weekend’s Uke Jam (which was awesome, by the way) we played 20 songs. Six of the songs on our list had just three chords; nine songs had four chords; two had five; two had six; and one had seven chords.

This is partly because we try to make sure about half of the songs are not too scary for people who haven’t been playing long.

But it’s also because many of our favourite songs don’t have very many chords.

If you’re in the Waikato or somewhere nearby, come play with us sometime. I can pretty much guarantee that you will have fun.

Three chords can be tricky

Even when a song only has three or four chords it might be quite hard to play. Maybe the chords change often and quickly, or maybe they change in an irregular pattern, or there could be a difficult strum.

Israel Kamakawiwo’ole’s glorious Hawaiian version of “Somewhere Over The Rainbow” is a good example. Only a handful of chords, and it sounds so easy!

That’s because Brother Iz was a superb musician and singer. It’s actually quite a hard song to play and sing. But it is a great inspiration and motivator.

“Peace Train”, by Cat Stevens, is another great song that only has a few chords – but is very tricky to play well. I’d love to try “Peace Train” with the Uke Jam, but I think it’s just too hard.

Up close with harmony

I love harmony. I spent my teenage years as a classical music geek, analyzing the chord progressions of Beethoven piano concertos. They all have way more than three chords.

When you play classical music, you don’t need to have the chord changes in your musical GPS, you just follow where the score takes you.

One of the many things I love about ukulele, after spending so long in the classical music education system, is that I get up close and personal with the chords.

When we play ukulele we play the chords (the harmony), the rhythm (the strum) and we also sing the melody and the words. Epic multi-tasking!

With a ukulele there are usually different ways to play the same chord. This is called different voicings. The chord will sound a bit different with another voicing.

However, sometimes one chord voicing just sounds much better than another in a particular song. D7 is one example. Sometimes the Hawaiian D7 sounds right; sometimes the barre D7 sounds better.

With ukulele we play a simplified version of each chord. A ukulele chord has four notes, because there are four strings. Whereas a keyboard player can play a chord that has up to 10 notes in it.

Because ukulele chords are simplified, sometimes the same chord shape might indicate two different chords. Am7 and C6 are both the “no fingers” chord.

New Zealand musician Don McGlashan sings a great line about a “chord change that makes the blood change direction in her veins” (“Theme to The Lounge Bar”, The Front Lawn, 1988).

I love the Em to B7 change, e.g. in the Middle 8 of “Can’t Help Falling In Love”, which is usually played in the key of C on ukulele.  That chord progression is also in my version of “Black Silk Ribbon”, by KT Tunstall and Bic Runga.

Some of my other favourites include the Celtic four-chord progression of “Skye Boat Song”. Here’s my Youtube video showing how to play it.

I also love the chord pattern in “We Wish You A Merry Christmas”.

My favourite key to play on the ukulele is D.

One of my favourite chords is Fmaj7. This chord is essential for playing Burt Bacharach songs (all of which have zillions of chords, I’m sorry to say), and also my ukulele group’s version of “Space Oddity”, by David Bowie.

And Bm7 is such a handy chord. It’s just a single barre on the second fret.

In my Saturday afternoon ukulele group, The Strumbles, we’re currently in love with “Slippery People”, by Talking Heads. This cool song only has one chord – Bm7 – and a very funky strum. (So it’s not an easy song to play. Your hand gets tired after a while.)

“Slippery People” is the only one-chord song in our repertoire.

Most songs have more chords than that. Many Tin Pan Alley songs, and songs from musicals, and epic 70s ballads, have complex harmony, with lots of chords. Too many to be played easily on ukulele. But there are some exceptions.

You won’t know how many chords a song has, until you go looking.

For me this is one of the most enjoyable and surprising aspects of the musical adventure of playing ukulele.