What makes your heart sing? 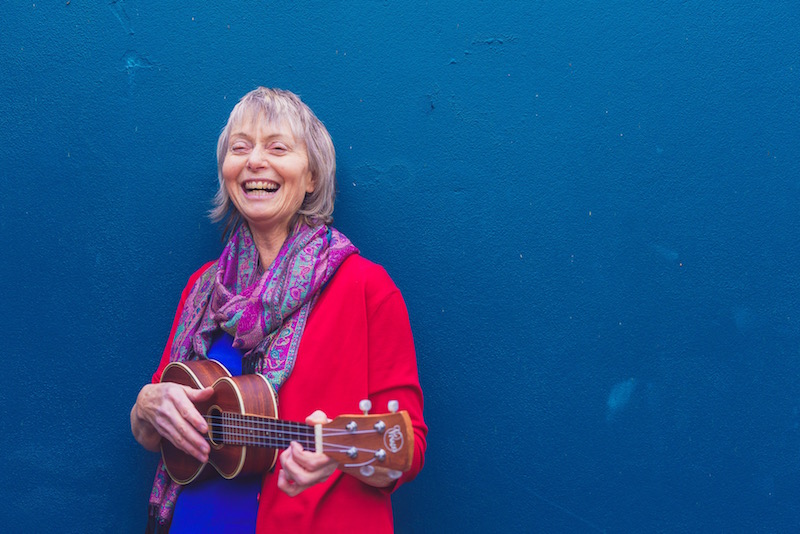 With the ukulele, you get to play the music you love.

My aim as a teacher is to fast-track you to the place where you can play the music that makes your heart sing.

Because that’s the most fun thing in the world. Yes, making music is fun anyway. But it’s exponentially more fun and more joyful when it’s music you absolutely love.

What songs make you jump for joy?

On the final night of my ukulele group class I had a wonderful surprise. At the beginning of the lesson I asked the group which song they loved playing most. When it came to Gerard’s turn, he picked up his ukulele and played Can’t Help Falling In Love. He played all the way through, while singing along with his ukulele.

This class was the “beyond beginners” group. Most, including Gerard, had only been playing ukulele for three months. And I don’t expect people to perform on their own in class. (But sometimes they do anyway!)

I’d introduced this song to the class because many people love to play it. It was quite a stretch for the beyond beginners – it has eight different chords.

But it paid off. Gerard had obviously been playing it by himself at home. And he sang it like he meant it.

Another song that many people in my classes love to play is Hallelujah, by Leonard Cohen. It’s not easy, but when you love a song, it motivates you to practice.

Same goes for the Hawaiian version of Somewhere Over The Rainbow. This song looks easy, but it’s actually quite tricky. That’s because Brother Iz is an awesome musician.

Putting the basics in place

You can start playing the songs you really love quickly – but not instantly. First you need to build your foundations.

These include confidently playing fundamental chords and strumming at the same time. You need to be able to change chord while you’re strumming and keep in time. You should also be working towards singing while you’re playing. This takes a bit of practice.

You probably won’t be playing your absolute favourite song in the first couple of weeks. But it doesn’t take years. It took Gerard three months to get to Can’t Help Falling In Love. It’s not that long in the scheme of things.

Many people get joy out of jamming with friends and playing at parties and family events. That’s me. I love it when people are singing along and joining in. Ukuleles fit really easily into group music making.

I know some experienced musicians who say: “Oh, I just enjoy playing anything.” That’s true, when you’re playing with people you love.

There are plenty of easy three-chord songs that are handy for parties. I teach these in the beginners’ class. Pick simpler songs to start with. Make a list of what you can play and bring along copies so people can join in.

The songs you love

This is different for everyone. For some people, it’s Riptide, by Vance Joy. For others, it’s I’m Yours, by Jason Mraz, or George Ezra’s Budapest. Sometimes it’s generational, but not always. One friend (and she’s in her 40s, she’s not a Boomer) loves Bob Dylan.

For me it’s the Beatles. I get a huge kick out of playing Drive My Car on ukulele. However, Beatles songs are usually tricky: they typically have at least eight chords and more than one strum.

I‘ve come to love Abba through playing Fernando and Mamma Mia on ukulele. I love playing Gillian Welch’s Miss Ohio, a deadpan song about a badly behaved woman. “She says I wanna do right, but not right now.” And David Bowie’s Heroes.

But the song that’s making me jump for joy right now is Born This Way, by Lady Gaga.

When you’ve learned the basic chords and strums, challenge yourself. You don’t know what will work until you try. I’m still finding great songs that are easy to play. And also songs that sound like they ought to be easy, but are actually quite tricky.

Youtube videos are a great resource. But in my opinion, many Youtube musicians play strums that are harder than they need to be.

There are a few reasons for this. The video may be a performance rather than a tutorial. They may be highly skilled players, and the strums seem easy to them. Or if it is a tutorial, they may be teaching at an advanced level.

I always look for the easiest strum that still gets the right feel for the song. Being able to sing while I’m playing is important to me, and some of the more complex strums are very difficult to play and sing at the same time.

As quickly as possible

With the ukulele, the main thing is that you get to play the music you love. As fast as possible.

That’s why working with a teacher can be a good idea. You can check that you’re on the right track with the chords and the feel. And you can get some coaching with the strumming.

So, what songs make you jump for joy?